With an unprecedented increase in traffic volume, vehicle speeds and animal population, the likelihood of animal-collisions on rural highways has risen. There have been 750,000 annual animal collisions since the start of the 21st Century in North America alone, characteristically resulting in property damage to vehicles, potential injury to drivers and subsequent harm to animals.

With animal-collision fatalities on the rise, updated security measures need to be taken to reduce the threat to highways users. ClearWay minimises the potential for animal-collisions with its wide-area road coverage and early warning system. ClearWay is used for accurate animal detection in close proximity to the highways. 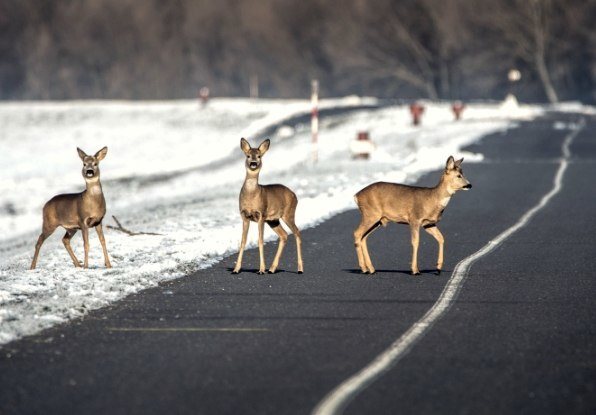 How Does it Work?

When ClearWay detects an animal in close proximity to the road, the system automatically activates warning signs that inform road users of the animals presence.

The road-side electric signs are only activated when an animal is detected, which keeps the road users vigilant as they know a potential threat to their safety is nearby.

The video shows our radars used in deer detection, by our partners Rotalec in Canada.

Why Choose ClearWay for Wildlife Detection?

The system is fine-tuned to detect animals larger than a small dog. Large animals can be detected at a higher range. It tracks the direction of movement and alerts the operator to the animals presence. The system also evaluates the potential threat of the wildlife to road users.

When an animal is detected, ClearWay is able to change the road-side electric signs to indicate a threat has been discovered. This provides the drivers with an early awareness so they can modify their driving appropriately and slow down. At slower speeds animal-vehicle collision is far less likely and fatalities are minimised.

Typically, animal collisions occur in more remote areas where it may be difficult to provide power and communications. ClearWay has been designed to operate with  solar power and wireless network to operate in the harshest environments.

The software can be easily modified to filter out the detection of small wildlife such as birds, which are unlikely to cause an accident, and therefore would contribute to the activation of nuisance alarms.

Points the exact location of an incident within seconds of occurring

How does Wildlife Detection solve this problem?

The Bømlafjord tunnel is one of Norway's longest and deepest subsea tunnels, at 7,820m long and reaching 260m below…

The M25 encircling London is Europe’s second-longest orbital road at 188km in length. Highways England is the authority responsible…

The extreme environment in Sweden during the winter months poses an issue for road users. The difficult driving conditions…

The Mastrafjord and Byfjord subsea tunnels make up part of the Rennfast road connection from the mainland, to the…

Our process begins with understanding your specific application requirements. We can arrange site visits and demonstrations tailored for your individual needs.

All your Clearway questions and queries answered. Visit area

Find out about our Clearway software and sensors. Visit area

Find out how our solutions compare to other technologies. Visit area

Hello, we think you’re visiting our website from the United States.
Is this correct?